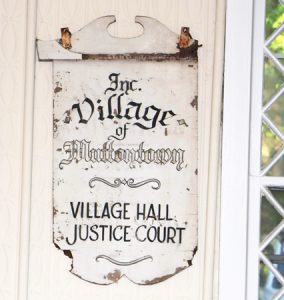 The Village of Muttontown was incorporated on August 31, 1931. It is a village of majestic hills and estates. Two former estates of New York City families are now known as The Muttontown Golf and Country Club and The Woodcrest Acres. The third estate (mostly intact), the former Brewster Estate, now Hoffman Center, is a 155-acre nature preserve and Chelsea Mansion located on the Muttontown Preserve, former home of the Village’s first Mayor Benjamin Moore.

The name “Muttontown” derives from early use of the land for sheep grazing. It is formerly a “great sheep district.” In the 1600s the early English and Dutch settlers found the rolling hills ideal for the thousands of sheep that grazed here, providing mutton and wool.

William Willock, Jr. and the Land Where Village Hall Sits

May 1, 1963 William Willock, Jr. transferred a land title to the Village of Muttontown, effectively allowing for 2.15 acres from his 200-acre Gladwood estate to be used as Muttontown Village Hall.  Willock’s father had been a successful railroad executive, serving as vice president of the Monongahela Connecting Railroad. Following this, Willock, Sr. helmed what was at one point the second-largest steel business in the country (behind Carnegie Steel), Jones and Laughlin Steel. Upon Willock, Sr.’s death, Willock Jr. inherited the entirety of his father’s $120 million estate.

The Willocks also notably maintained a full-scale locomotive on their estate at Gladwood.  The train was eventually moved to another of the family’s residences in Maryland.

Many of the photos below come directly from the Willock family collection. Our historian Stanley Jackson traveled to meet with the eldest living Willock in Maryland in July 2014 to scan these images from their albums.

November 9, 2020 - Muttontown Amnesty Program - Village of Muttontown Announces Amnesty Program The Reconciliation “Amnesty” Program will run until January 31, 2023 and will give residents an opportunity to legalize and maintain renovations, reconstruction and work performed without permits to their property. Residents who take advantage of this program will be responsible for a $1,750 surcharge and permit fees required without […]